the macLYON Collection currently consists of 1,450 pieces, the vast majority of which have been shown in collective or monographic exhibitions organized by the museum. As early as 1984, when the first exhibitions were inaugurated, works were created by living artists as part of exhibitions, and it was in this context that many works were produced, developed, tested, and selected to be acquired by the museum. Anchored in the actuality of the visual arts, the collection presents a great variety of forms, materials and dimensions: performance, painting, video installation, sculpture, sound installation, photography, drawing, cinema, computer programming and books. It is characterized by a large proportion of monumental installations, indicative of art’s evolution towards the creation of immersive worlds, which can be directly experienced by the visitor.

Brought together in an arts pole with the MBA since 2018, the two collections form a remarkable ensemble, both in France and in Europe.

Only existing in French version for the moment, the app « MAC Lyon, la collection » can be downloaded on the App Store and GooglePlay.

The macLYON has digitized almost all of its collection, which can be viewed online here. Each time you connect, a new selection of works is proposed. The search engine allows you to search by artist, work, keyword, etc. |texts only available in French for the moment]

The macLYON has the distinction of acquiring complete exhibitions, which can be shown at a future date, but it also conserves works that deliberately test the limits of their medium and the established categories of artistic disciplines in terms of what is new.
For example, certain paintings in the collection may be said to take the form of an installation (Lucio Fontana, Ambiante Spaziale, 1969), others continue to evolve over time (John M. Armleder, Gestrum Triplex, March 2006). Another work resides in the disappearance of the object from which it is formed (Claudio Parmiggiani, Terra, 1989) while another appears only five minutes a day a certain month of the year (Maria Nordman, Lyon, 1987).
A certain installation can only be fully seen over the space of one hundred days (Daniel Buren, Le temps d’une œuvre, 2005). A large figure of eight is used as a sculpture (Cai Guo Qiang, An Arbitrary History: Roller Coaster, 2001) while an extremely thin glass plate evokes a drop of black perfume (James Lee Byars, A Drop of Black Perfume, 1983). Another piece solicits our attention for a good fifteen minutes before rendering us uncertain of our perception (James Turrell, The Wait, 1989).
The moment of a performance is infinitely replayed by means of a video (Marina Abramović and Ulay, Impoderabilia, September 1977-1999, Jan Fabre, Zelfmoord?, circa 1980), while an endless sound seems to plunge us into an everlasting dream (La Monte Young and Marian Zazeela, Dream House, 1990).

More about the collection

To know more about the history of our collection and its specificities, go there

A roller coaster inside the museum!

This work needs an entire floor of the MAC. Impressive, isn't it?
It entered our collection at the end of the exhibition "Cai Guo Giang, an arbitrary history" in 2001.

An artwork evolving within 100 days

This work is both a matter of experiencing a duration and of making it perceive.
The light, filtered and colored by Plexiglas, changes at all times of the day.
Each day two plates are removed from space.

The other side of Hollywood

The Back of Hollywood evokes, without describing it, the hidden side of the city of entertainment.
The rectangular format of the work evokes both a cinema screen and a display panel. This format also refers to the way one experience the city: through the windshield of a car.

The artworks are acquired directly from artists, from galeries or private collectors. Its curators try to establish preferential relations, to negotiate best prices and to invite donations. However, regarding itself also as center of artistic production, the museum also fosters artistic creativity: Around 40% of the artworks have been especially created for its permanent collection.

The works in the macLYON collection can be seen around the world. They are requested on loan by museums or during Biennials, shown in thematic or monographic exhibitions. 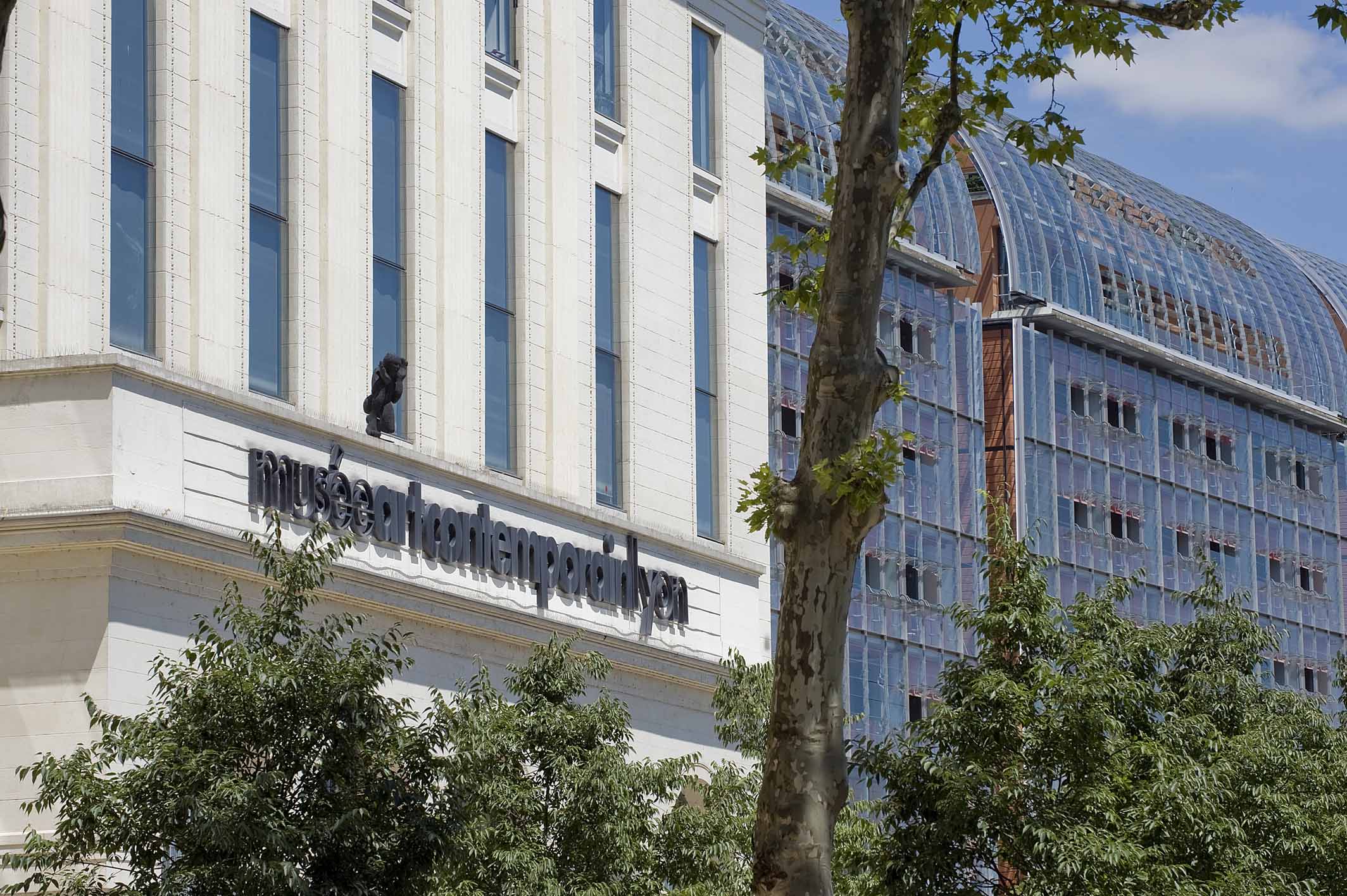 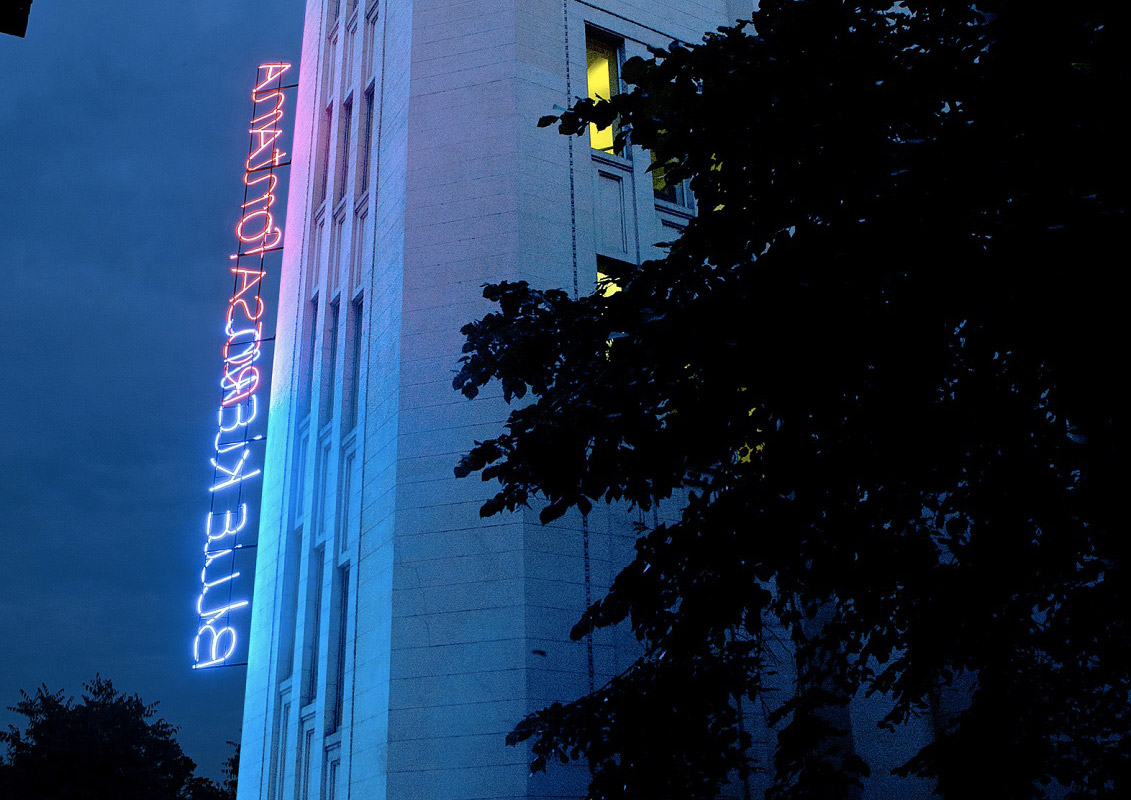 Artworks around the museum